Took the Political Compass test again a few days ago, and once again found that I slid even further left since the last time, so I’m just putting the result here now for future reference.

I first learned of this test in 2006 or 2007 and probably took it about six or seven times since then, which made this drift towards the left particularly obvious, as I remember my score on that scale being only around -3 at first and sliding noticeably further every single time after that. On the other hand, my social score doesn’t change much, the difference between the highest and the lowest being of no more than one point and, if I recall correctly, most scores being within two or three tenths of each other, indicating that there are probably just a few questions where I tend to alternate between two answers. 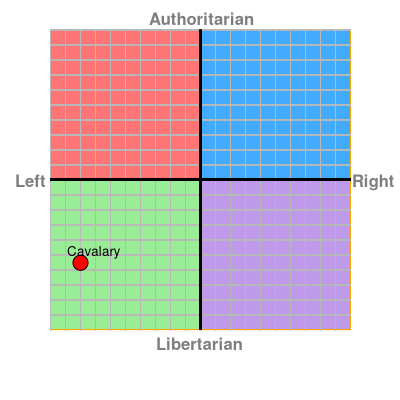 Considering how far left I ended up now, I’m inclined to say it’s quite unlikely I’ll slide even further, but as long as it’s still possible I can’t be certain of that. After all, my views in terms of economics can quite clearly be described as being far to the left, demanding an entirely new system that will guarantee a decent standard of living for all except those proven guilty of serious crimes without anyone still having any need to “earn a living”, and not making any difference between those who wouldn’t do anything at all and those who’d still choose to work but not have a particularly good performance. Granted, I’d like to see a few additional benefits for those whose performance would be particularly good, but any actual special treatment should be reserved only for those who’d have truly important achievements that’d bring significant benefits to many or to the world as a whole.